These pages are concerned with Rabbits, Hares and Pika, I called the main page 'rabbits' just in case people didn't know what a 'lagomorph' was. All these animals are members of the family Leporidae and of the order Lagomorpha. In older classifications lagomorphs were usually placed in the order Rodentia. Both rodents and lagomorphs are gliriform mammals; that is, they have enlarged, ever-growing incisor teeth that function as effective tools for gnawing. Under this scheme, the lagomorphs were the suborder Duplicidentata, and the true rodents the suborder Simplicidentata. Early workers, however, recognized many features separating these suborders. For one, there are two pairs of upper incisors in lagomorphs (thus the name Duplicidentata) as opposed to one pair of upper incisors in rodents (Simplicidentata). It is now known that lagomorphs and rodents have long separate histories and that even their earliest representatives did not closely resemble one another. Accordingly, it is more accurate and currently generally accepted to classify the two groups as distinct orders, Lagomorpha and Rodentia.

EVOLUTION, PALEONTOLOGY, AND CLASSIFICATION
The order Lagomorpha appears to have originated in northern Asia, probably by the end of the Paleocene (about 55,000,000 years ago), and has been relatively stable morphologically throughout the approximately 40,000,000 years since the end of the Eocene, when its fossil record first becomes well documented. Lagomorphs seem to have established early in their history the patterns of dental and skeletal development that were to change, for the most part, only by gradual advances in the basic pattern. Within the order several trends can be observed from more primitive to more advanced lagomorphs: development of ever-growing cheek teeth, simplification of the pattern of the occlusal surfaces of the upper cheek teeth, and shortening of the shaft of the lower incisor where it passes back into the jaw. When dealing with fossil forms, often known only from fragments of jaws and teeth, the most useful characters that differentiate taxa are ordinarily found in the structure of the anterior two upper, and anterior lower, premolars. Presence or absence of the last upper molar may also be important, as may the pattern of the upper cheek teeth. When preserved in fossils, structure of palate and of lower jaw also provide characters that assist in determining affinities. 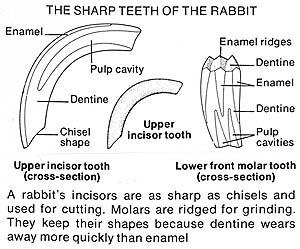 The family of rabbits and hares (Leporidae) entered North America by the end of the Eocene and underwent most of its Middle Tertiary development there. By the Pliocene (about 7,000,000 years ago) it had become reestablished in Asia and had moved also into Europe. The leporids now extend throughout those ranges and down to the tip of South Africa and as far south as northern Argentina in South America.

The pika family (Ochotonidae) spread from Asia to Europe, where they developed into a number of types in the Middle Tertiary. One of these lines persisted until the late Pleistocene or early modern times (about 1,000,000 years ago) on Corsica and Sardinia. Other ochotonid branches reached Africa and North America in the Middle Tertiary. The extant genus Ochotona appeared in Asia in the Pliocene and spread from there, reaching western Europe and eastern North America in the Pleistocene. The current range of the genus represents a considerable reduction from that during the Pleistocene.

GENERAL FEATURES
Wild lagomorphs are small to small-medium in size, ranging from the smallest pikas, about 150 millimetres (5.9 inches) in length and 100 grams (3.5 ounces) in weight, to the largest hares, 700 millimetres (27.6 inches) and 4.5 kilograms (10 pounds). Wild rabbits range between pikas and hares in size, while some varieties of domestic rabbit may reach up to seven kilograms in weight.
Nearly worldwide in distribution, lagomorphs are naturally absent only from most of the Southeast Asian islands, Australia, New Zealand, Madagascar, southern South America, and Antarctica. Humans have introduced rabbits and hares into areas outside their original ranges for purposes of sport and to provide a readily available food supply. The natural range of the Old World or European rabbit, Oryctolagus cuniculus, appears to have been southwestern Europe and North Africa; however, in Roman times this species was often introduced to islands, where it flourished, and spread north and east, partly following human agricultural activities, reaching Britain in Norman times. More recently, Oryctolagus was introduced for sport and food into New Zealand and Australia, where the absence of native predators and other factors soon led to its becoming an agricultural pest and a threat to some of the native fauna. In North America several species of the cottontail rabbit, Sylvilagus, have shown an increase in abundance and a broadening of range in areas disturbed by human activity and settlement.

Click on one of the links above to find out more about a specific species..

Back to Main PiedPiper Page